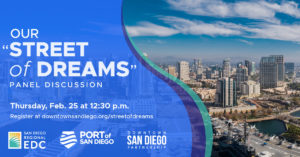 We all know Harbor Drive is a great place to catch a sunset and enjoy the waterfront, but did you know it’s also a national hot spot for the blue economy? The San Diego region’s established and growing industries who are finding success in this hidden-in-plain-sight sector were in the national spotlight with the premiere of the Harbor Drive episode in “Streets of Dreams with Marcus Lemonis.” Aired in mid-January 2021, this special series by the host of CNBC’s “The Profit” pulled back the curtain on some of the most iconic and influential streets that fuel America’s most vital business cultures. Featured alongside the diamond dealing on Manhattan’s 47th Street and country music on Nashville’s Music Row, the story of Harbor Drive was told as the “under-the-radar nine-mile gold vein” that runs along Downtown’s waterfront.

Join the Downtown San Diego Partnership, the Port of San Diego, and the San Diego Regional EDC for a panel discussion with some of the players featured in the episode. They will take a look behind the scenes at the episode’s production and discuss how the region will benefit from the growing national attention to the bright future of the blue economy and sustainable use of ocean resources. Join us to reimagine the future of San Diego’s Blue Tech Bay as a place where old and new collide to drive economic growth.